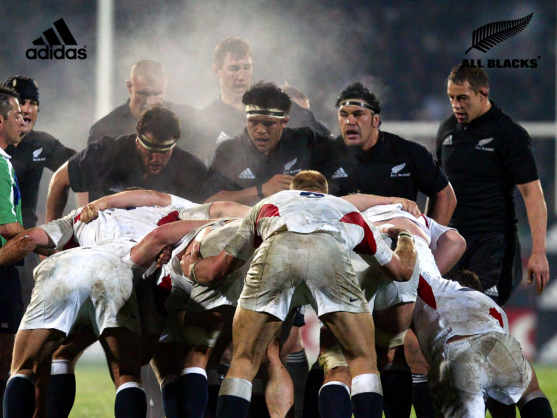 In rugby, a “scrum” is a means of restarting play after a minor infringement. It involves up to eight players from each team, known as the “pack,” or “forward pack,” self-organizing together in three rows and interlocking with the free opposing team’s forwards to gain possession of the ball.

As a graduate-student at The George Washington University – School of Business in pursuit of a Master of Science in Information Systems Technology, I recently published a case-study on Google AdWords.  I’ve developed a newfound respect for Agile methodologies, more specifically Scrum.  I recall encountering a work by Jeff Sutherland predicting that academics will study business-management science within the context of pre/post-Scrum, as a watershed moment in history. My case-study was produced for Dr. Elias Carayannis, professor of Information Systems Technology Project Management and author of The Story of Managing Projects: An Interdisciplinary Approach; he originated the “Quintuple Constraint,” broached during one of his lectures at GWU circa 2005, galvanized by the research presented herein- please find the abstract and introduction below, in addition to the entire publication via Scribd and the corresponding presentation hosted with Google Slides.  Project management is along the critical path to progress into the next century.

The Art of Scrum && Quintuple Constraint | Introducing Scrum to Google AdWords | Abstract: Google is especially proud of maintaining a unique, quirky start-up culture in spite of becoming one of the most powerful companies in the history of capitalism.  Roughly 90% of Google’s business is driven by AdWords (GADW), a subsidiary offering advertising services and analytics as a platform.  Although their ubiquitous core-business of Search facilitates 3.5 billion queries per day, Google is celebrated for much more- from Google X and Google Ventures to Nest Labs and DeepMind.  Evidently, Google devised a process for exceptional product development while maintaining the culture of a quirky-startup.  Contrary to popular belief, AdWords, Google’s bread-and-butter business, submit to the liberating-shackles of process and procedure afforded by Agile project management methodologies, more specifically with “Scrum,” only eight years after incorporation.  This paper will cooperatively examine GADW’s adoption of Scrum and affiliated stakeholder guidance to preserve strategy, structure and execution governed by cost, scope, time, quality and reliability-the “quintuple constraint” of contemporary project management.  Sun-Tzu said, “Every battle is won before it is ever fought,” which was recently substantiated by a study concluding that “alpha” managers (in the statistical construct, not in psychology) spend more time in the phase of planning than actual execution(Appendix:9.1.1).  Google commissioned Agile pioneer Mark Striebeck to experiment.  Although Striebeck’s administration wasn’t a categorical success, it was anything but a failure, as Google continues to outperform market expectations to this day, boasting a $5.1B stock buy-back in 3Q15.

The classical principles and standards of “waterfall” project management are simply not conducive to the iterative nature of software development.  Writing software, isn’t all too far from like writing this study-many drafts or iterations were produced before the final release, or publication in this case.  Borrowing a concept from programming, these productions aren’t a “linear sequence,” or a “plug ‘n chug” of operations- if it were, waterfall management could and should be applied, which is to say classical project management will endure as an alternative to Agile frameworks, like eXtreme, LEAN, Feature-Driven Development (FDD) and in this case, Scrum.  Agile methodologies gradually garnered industry acclaim shortly after Google’s embrace.  Tech projects, let alone the state-of-the art, are born mired in risk and uncertainty- dynamic and ever-changing, an iterative framework like Scrum, enables workgroups to prioritize objectives in a series dynamic of workflows, allowing change by discovery or upon request, committing to subset features ideally delivered in each two to four week iteration, known as a sprint.  As the Chief Product Owner at Yahoo observed, “[Scrum] is the only software-development process that has demonstrated linear-[scalability] when adding resources to large projects.”  According to industry research, virtually every project manager ever studied encountered unpredictable changes and none of the projects were completed exactly as planned.”  Traditional project management, or any managerial rigidity whatsoever, was intentionally devoid in the early days of Google- in fact, the company prides itself with the overall mindset of maintaining as little to no management standards as possible.  Reiterating the criticality of AdWords as a core business segment, 95% of Google’s aggregate revenue was driven by Google AdWords (GADW) at the time concerning the subject case.  In 2005, just eight years after incorporation, the growing complexity of the AdWords application systemically outgrew relaxed product management standards, missing deadlines due to operational inefficiencies.  Though unconventional, Google corporate strategists, including the original founders, had some sense of basic strategy, structure and execution.  Necessitated by the aforementioned and increasing concerns, Google executives engaged now industry-expert and pioneer of Agile Scrum, Mark Striebeck, for process and structural retrenchment; he was commissioned to accomplish the following objectives:

Strategic objectives coincidentally required project management, as the actual project, to ensure the long-term viability of GADW business segment in conjunction with their core-competency of Search, to guarantee effective execution with quality and reliability efficiency standards.  Contemporary project management accounts not only the “triple-constraint” of cost, scope and reliability constituting traditional “waterfall management” but additive are quality and reliability, comprising the “quintuple constraint.”  Apropos, a stakeholder map identifies related interests directly and indirectly involved with any project undertaking for strategic intercourse; in this case, from the upstream- corporate strategists, business-segment managers and the actual software engineers (Google’s guinea-pigs for the Scrum experiment)-and downstream- to ancillary interests- including business-to-business customers, all risked adverse impact triggered by protracted application release cycles, or even system outages.  A comprehensive stakeholder survey will identify all Google affiliates and interests imperative to the GADW Scrum project on front-end applications, to reveal the constituents of the quintuple constraint governed by corporate strategy, structure and execution.

1 comment for “Google AdWords: The Art of Scrum && Quintuple-Constraint”