“With kings and counselors of the earth, who built for themselves places now lying in ruins;”

In observance of recent market turmoil precipitated by numerous factors, but principally by the devaluation of RMB and overall uncertainty with respect to China, I couldn’t help but reminisce once again about my undergraduate studies back at GW BSchool involving another prescient call I made within a thesis paper predicting the Great Recession, roughly one year before capital markets gyrated for the worst; the report was submitted on April 29, 2008, for my International Banking class instructed by Prof. Yoon Park, former board member of Samsung and senior economist at the World Bank.  Keep in mind, the consensus on Wall Street (at least as far as mainstream-media coverage was concerned) believed subprime contagion was isolated, but few contrarians like myself believed that was only the canary in the coal mine, expecting the consequences to become far more pervasive… 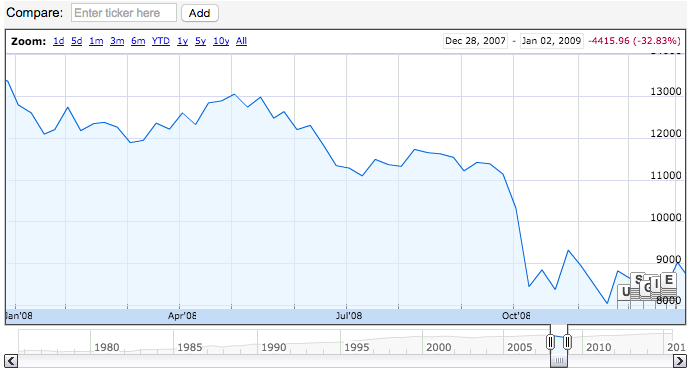 A gentle reminder of the 2008 Dow Jones Industrial Average.

I’ve included my introduction within this post; the report in its entirety is accessible below this intro via Scribd.

The imminent recession of 2008 will be far more severe than economic downturns recently experienced. The recent “dot-com” bust and the succeeding terrorist attacks of 9/11 courted a recession relatively isolated in nature, exposing a mere contingent of anxious venture capitalists and greedy investment banks. An activist Fed, helmed by Greenspan, prescribed a series of aggressive interest rate cuts to unprecedented lows, in order to foster economic growth and preserve American consumer confidence for a short while longer. Historically low interest rates triggered a housing construction boom, resulting in a myriad of reckless financial innovations designed to afford the high credit risk, or subprime borrowers with a home furnished on credit, which was to be financed by the continual growth of the housing market. Moreover, mortgage lenders coaxed credit-worthy homeowners to amend their fixed rate mortgages to an adjustable rate mortgage (ARM), creating a new stash of cash or presenting an opportunity to upgrade houses. Additionally, appraised residential real estate values continued to climb, creating a perceived increase in net worth for homeowners, leading to more spending based on home equity and other forms of credit. As housing demand lapsed, a glut in housing inventories emerged, and prices began to fall. Incidentally, the subprime borrowers began to default on their loans and foreclosures ensued, resulting in further declines in relative housing markets. However, as of 2008, the subprime market comprises 20.6% ($1.4 trillion) of outstanding mortgage loans, whereas subprime and prime (ARM)’s constitute 21.3% ($1.34 trillion) of outstanding mortgages1. Now, a series of adjustable rate mortgages are beginning to reset. The magnitude of the looming recession has yet to be realized, as it involves not only the consumer, but the entire housing industry, and local, commercial and investment banks as well. Like a brewing “economic storm”, all of the aforementioned elements are just beginning to converge. At the end of the day, the performance of the economy is contingent upon the welfare of the American consumer, as private consumption represents roughly two-thirds of the Gross Domestic Product2. Accordingly, if consumers sustain a blow, so too will the economy. A consumer drowning in unanticipated mortgage payments, while shouldering massive credit debt with limited access to additional credit, will be forced to either dump the house on the market, or hunker down and weather the payments. Ultimately, the consumer will cut discretionary spending.Upon examining the American real estate sector within the historical context of home financing and the evolution of home mortgage securitization, relating correlations between the trends in mortgage financing and the housing construction boom, cooperatively reveal a more systemic, macroeconomic problem-the proliferation of mortgage-backed securities, which enable a “debtor nation”.