This week marks my return to The George Washington University in pursuit of a Master of Science in Information Systems Technology (MSIST).  The hybrid graduate business program crossed by computer science will begin with Introduction to Programming Fundamentals with Java and Information Technology Project Management 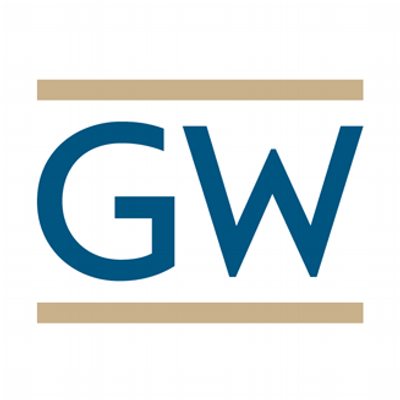 .  Naturally, I thought about my undergraduate years, precipitating a flood of academic nostalgia, including a recollection of my investment thesis for International Business Finance during Spring 2008.

At the beginning of the semester, our class was subdivided into groups of four (unluckily, we were the odd-lot of three) then challenged to draft an analyst report on any stock within the S&P 500, except for Apple (due to the extensive coverage), citing FY2Q price-targets in the report due at the end of the semester.  At the end of class, our team elected my proposal, Monsanto, a biotech company. Nearing the end of the semester, Monsanto was trading on a tear at $120.27 per share, drafting from the ethanol movement, which was heavily politicized at the time.  As evidenced by the chart below, our analysis and target of $140 was within $0.05 of our estimate-not bad for three college seniors… 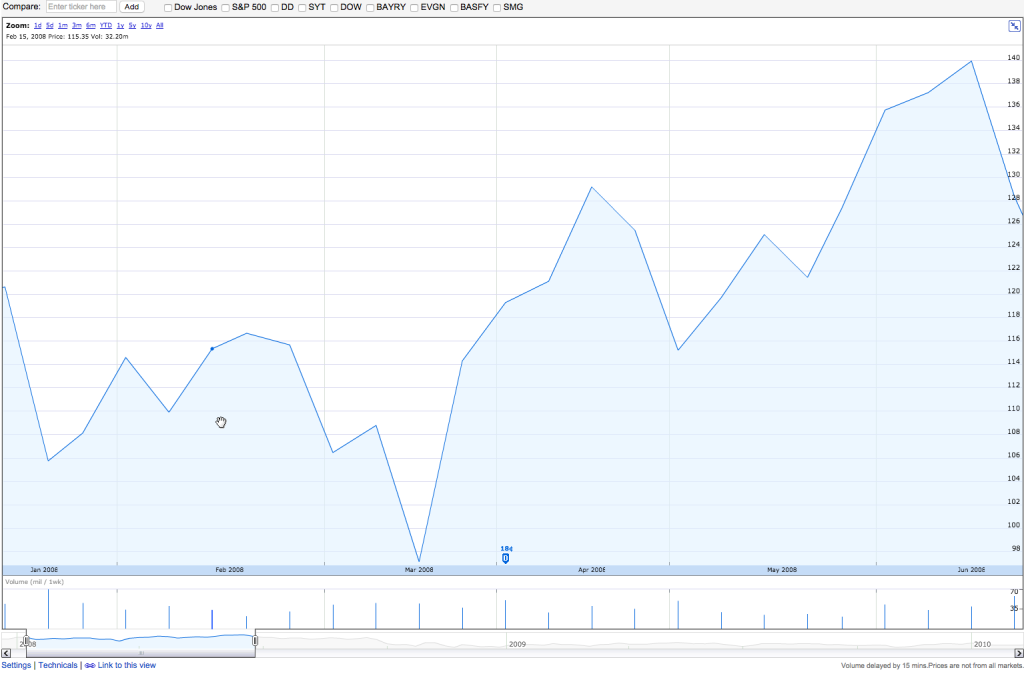 I’ll wrap this entry with a draft of my original investment thesis:

Through synergies of biotechnology and agriculture, Monsanto provides farmers with a sustainable competitive advantage by simply introducing one or more genes into a seed, which thereby combat unwelcome weeds and repel unwanted insects, producing abundant crop yields2.

The application of biotechnology in the agricultural sector has engendered worldwide debate, promise and controversy. Though the international environmentalist lobby has historically proven successful in generating disdainful consumer sentiment in genetically modified organisms (GMOs), stigmatizing biotechnological participation in traditional farming with labels such as “Frankenfood”, the inherent benefits of GMOs appear to be gaining support, as demonstrated by the steady, international growth of such crops now harvested in America, Brazil, India and other developing countries3. Concordantly, the recent World Trade Organization ruling in February of 2005 relinquishing the moratorium imposed by the European Commission on GMOs sowed within the Euro Zone, demonstrates the gradual international embrace of “agri-tech”. The company is currently receiving about 45% of its revenues from outside the U.S., and notes that strong foreign currencies relative to the dollar should promote solid sales and earnings growth . This leads us to believe that continual growth will be evidenced. More specifically, corn and soybean farmers have realized tremendous profits by planting such genetically modified crops.

The current driver in the “agri-boom”, is the demand for ethanol. Farmers are responding from increased demand in corn, and planting accordingly. The foreign and domestic demand for biofuels and ethanol, combined with the demand for “proteins” in emerging markets, affords Monsanto users with incredible strategic leverage, as genetically engineered seeds provide farmers with the benefits of using less water, producing more food from less land, and farming less fertile land, ultimately reducing the environmental impact or commercial agriculture .

Monsanto offers an elegant portfolio of corn seeds and chemicals. The premium seed system, “Roundup Ready 2 Corn”, is a perfect product synergy consisting of Monsanto’s very own chemical weed killer, Roundup, and a seed modified to maximize root protection in roots and stalks. “Roundup Ready 2 Corn” enables farmers with the ability to overcome natural obstacles to plentiful yields, such as weeds, by spraying Roundup over the entire crop, effectively eliminating every plant organism without a “Roundup Resistant Trait”. Sown successfully, a farmer may realize an increase of 6.5 bushels per acre more than the leading herbicide program7.

Monsanto is committed to American energy independence through ethanol. In 2006, U.S. ethanol volume displaced about 170 million barrels of imported crude oil, valued at $11 billion dollars; by 2015, approximately 5 billion bushels of corn could produce over 15 billion gallons of Ethanol8. The company’s recent development of High Fermentable Corn (HFC) is a “hybrid for a high ethanol yield capabilities” exclusively developed for the most efficient refinement of ethanol. One acre of HFC produces 420 gallons of ethanol, whereas one acre of conventional corn produces 180 gallons of ethanol9 10.

As of this entry, Monsanto (MON) trades at $103.61.  I remain bullish on the stock as a constituent of a diversified portfolio, not so much on the grounds of energy independence (I believe Elon Musk and Tesla are re-defining that movement) but more specifically on conservation, particularly because of the looming water crisis threatening the Ogallala Aquifer; genetically modified organisms only require about 10% of the water necessary for organic counterparts.  Moreover, the science is in and hailed by world-renowned academics and scientists including Steven Pinker, Neil deGrasse Tyson and Bill Nye.